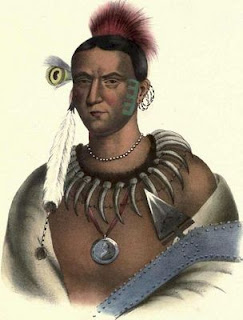 Mahaskah, was born near the Des Moines River, in Iowa, in 1784.  The tribe was known as the Iowa or Ioway tribe.  His father, Mauhawgaw, was invited by the Sioux to a dinner.  While at the dinner, the Sioux surprised Mauhawgaw, attacked him and killed him.  Mahaskah was very young at the time.

Youth
Mahaskah went with a war party to avenge his father's death.  Being so young, he did not lead the war party, but gave the lead of the party to one of the most experienced braves. They were victorious over the band of Sioux that had killed his father and Mahaskah killed the Sioux chief.

Battles
Mahaskah was then involved in eighteen battles with other Native American tribes and was victorious in every one.

After one battle, the braves of four women were killed in the battle and as was their custom, Mahaskah married all four of the wives that were left without husbands.  One of the wives was very beautiful and she was his favorite wife.  Her name was Rantchewaime, or the Female Flying Pigeon. 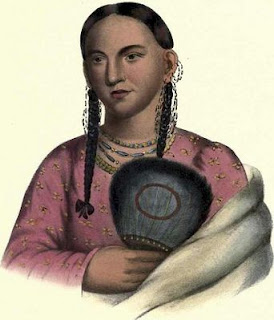 Wife, Rantchewaime
While accompanying White Cloud on a journey to see the President of the United States, James Monroe, Rantchewaime was thrown by her horse and killed.

Death
In 1833, a group of Omaha Indians killed an Ioway Chief named Crane. Mahaska refused to allow his braves to raise a war party to avenge this murder, instead appealing to the federal government for justice in the matter. When several Ioway killed six Omaha, Mahaska assisted General Hughes, the Ioway agent, in arresting them. The next year one of the Ioway braves escaped from Fort Leavenworth, tracked Mahaska to his camp along the Nodaway River and killed him.

White Cloud was killed in 1834 by one of his own braves.

During his life, Mahaskah had 10 wives.

Through his favorite wife, Rantchewaime, he had a son that was also named Mahaskah.